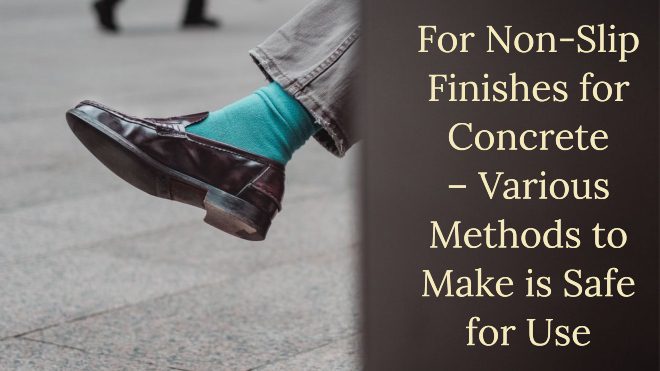 Why use special treatment for wet and slippery surfaces

Surfaces that are frequently wet must be given special treatment. In other words it would be dangerous or inconvenient if the floor is slippery, thus drawing immediate attention and the need for treatment to ensure a non slip finish in Nelson Bay. Such finishes can be achieved through the use of hand tool techniques. This would include methods like sawing, or application of an abrasive aggregate with the use of epoxy resin materials, and by setting non-slips strips all over the concrete.

Yet another method of obtaining a non-slip surface is called Troweling. It is also the easiest way to obtain a non-slippery surface which is probably least durable. Depending upon the degree of slip resistance required, such methods might consist of a merely discounting troweling, after a wood floating operation to produce a gritty surface or swirl troweling in order to raise the ridges on such concrete surfaces. If in case the foot traffic or vehicles seems too heavy for industrial applications, has been found advisable to use abrasive grains in the concrete surface to produce a long lasting non-slip surface.

Usage of 2 common base materials

The two most popular base materials used in such non-slip abrasive grits are silicon carbide and aluminum oxide. The extreme sharpness and extreme hardness of such abrasive grains are embedded in concrete. They result in some kind of effective abrasive action. This is in turn provides slip – resistance that is quite long lasting. In the past few years, sawing has been a technique that has been used in production of slip resistance surfaces in hardened concrete. Such a technique is mostly used when conditions are prevents application of a non-slip surface at the casting time, when discovery of the need of slip resistance is made right after the concrete has hardened.

Sawing technique is yet another technique

This is yet another technique used to create a non-slip surface in hardened concrete. This technique is mostly applicable when conditions prevent applications of non-slip surfaces at the time of casting or when discovery of the need for slip resistance after the concrete has hardened.

This is yet another technique for achieving an anti-skid texture on already hardened concrete surface is the application of compounds that are textured and hardened. Epoxy resins are used as one of the most popular materials in this work.

The first full scale application in the nation of an anti-slip roadway spray to cut down on rainy weather accidents. This single application will last 6 months and reduce wet weather skidding up to.

Limestone coatings in Sydney are few of the latest in elegant high end concrete coating design.